Counterfeit phone chargers can be deadly.

We’ve seen an increase in the number of incidents being reported about fake, cheap and unbranded chargers – many of which fail to meet UK safety regulations and can lead to electric shock, injury and cause fires.

With that in mind, it’s important to be aware of the risks when buying a phone charger. 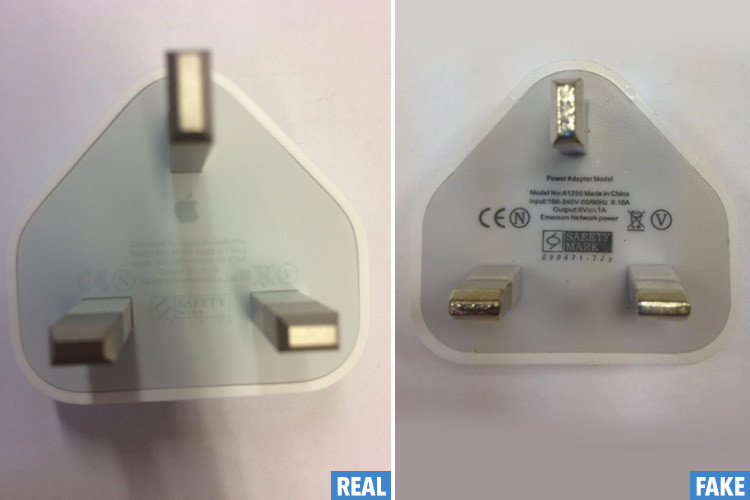 How to spot a fake Apple charger

You don’t need to be an expert to spot the difference between a genuine and fake Apple charger – our handy guide will tell you everything you need to know.

Text and markings on the plug

Look for missing markings (like the CE mark) or spelling errors. These are the easiest way to spot a counterfeit – but beware, as fake products are becoming more sophisticated.

This can be another fairly obvious indicator of a fake. The finish on a genuine charger is high quality, matte and uniform. On counterfeit chargers the finish is usually glossy or shiny with imperfections.

The USB port on a counterfeit charger might be upside down, or in a different place. A genuine charger will also have a serial number at the back of the USB port.

Our testing has shown that the pins on counterfeit plugs are much weaker than required by the standard. This is typically because they are metal-coated hollow plastic, rather than the solid metal used in genuine products. An easy check for this is to simply flick the largest pin and listen to the noise it makes. A genuine plug will sound and feel solid, while counterfeit products will make a ‘plastic’ noise and feel hollow.

As counterfeit chargers contain few, if any, of the higher quality components required for safety, they are usually significantly lighter than genuine chargers. The charger should weigh at least 40g.

The plug pins on a fake Apple charger may be larger or smaller than a genuine one, and may be positioned in a different place. The easiest way to check is by using the Electrical Safety First plug checker tool.

Many imported chargers do not satisfy UK safety regulations and can cause serious electric shock, injury or fire.

Suppliers and retailers have a legal duty to ensure that all electrical equipment they sell is safe.